Kumo Lumo is a sweet, casual title that will delight kids and adults alike. While it is not a flawless game, it is entirely endearing with its intuitive gameplay, its originality, and its simplicity.

In Kumo Lumo, players take on the role of a smiling little cloud, using powers like rain and lightning to grow forests, put out fires, and zap enemies.

The first thing you’ll notice when picking up this free to play game is its graphics, which resemble paper and cardboard cutouts. Visually, it’s similar to Paper Monsters, and the 3D artistic style makes Kumo Lumo look fantastic.

To play, you will spin the world with a finger, swiping to turn. At the same time, you will tap and hold on Lumo (the cloud) to produce rain, which is used to water trees to grow forests. You can also move Lumo around the screen with a finger, directing him where he needs to go.

Lumo has a limited amount of rain that he can produce, so when he is running low, you will need to gather up clouds to refill the meter. Each level has a goal you need to complete, such as growing a certain number of forests.

If you complete the goals and collect all of the clouds, you will be rewarded for your efforts with three stars. 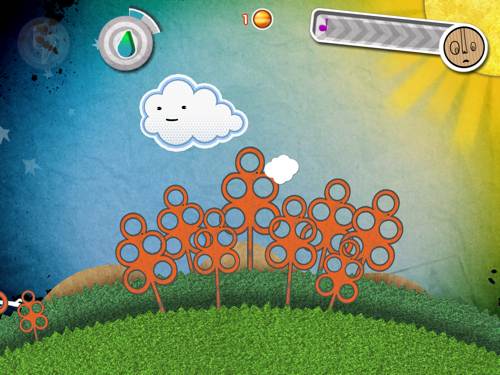 Of course, this game is not all about creation – there are also enemies to destroy. Naughty little fire sprites will set fire to the forests in some levels, and you must eliminate them quickly. If you aren’t fast enough, time will run out, and you will need to restart the level.

There are also black clouds and other enemies to avoid, which present a decent challenge in the game. It’s neither too easy nor too hard, giving it just the right amount of fun, especially for youngsters.

It does tend to get a bit repetitive, so adults might not enjoy the game quite as much, but I thought its charm made it well worth playing.

There is a currency, gold, in this game that you can earn during some levels or purchase. The gold is used to improve Lumo’s abilities like his water limit and his lightning.

What I liked: The artwork is original and the gameplay is simple, but fun. Kumo Lumo is a great casual title.

What I didn’t like: While there are Game Center leaderboards, there are no achievements, which was disappointing. I would also like the ability to skip cutscenes. Though I liked Kumo Lumo, I thought that the gameplay was overly repetitive.

To buy or not to buy: Kumo Lumo is a free app, and well worth taking the time to download it. I’d definitely recommend checking this one out.