If you have an iPad and one of Apple’s laptops (a not too uncommon pairing), then be aware that, depending on how you arrange them, your iPad may put your Mac to sleep. Apple has made some creative use of magnets in its systems over the years, with lid latches, MagSafe power connections, and other accessory attachments for its systems. One notable area where Apple has made use of this technology is in its MacBook laptops, where magnets and magnetic sensors in the chassis and lid bezel activate when in close contact, so the system will automatically go to sleep when the display is in a closed position. This feature is a convenient option to have; however, unlike mechanical latches, magnetic fields are not specific to the desired device and will attract or repel items whether you want them to or not, so they may trigger or be triggered unintentionally.

This news aligns perfectly with our own predictions back in December: we wrote that Apple would construct a new R&D center in the city of Ra’anana, but only if it got enough engineers on board.

Competition from Intel to hire former TI employees threatened this development – Intel had reportedly offered “healthy compensation packages” in order to lure engineers to the company – but it looks like Apple was successful in its attempts; Globes reports that Apple apparently nabbed 100-150 employees to staff the new development center. Our sources, however, have informed us that the number of employees currently stands at ”almost a hundred,” with plans to add more.

We previously detailed that Apple was hiring “dozens” of engineers from Texas Instruments, after the company began cutting around 250 jobs from its Ra’anana development center.

According to our sources, Apple plans to open the new R&D center in the city in “the second half of 2013.” This will be its third in Israel, as Apple already operates R&D centers in both Haifa and Hertezliya.

Apple may not be king when it comes to smartphones around the world, but at home it ended 2012 as the top OEM. In the US, Apple is increasing its share in first place and Samsung is slowly gaining on it in second. Rounding out the top five are HTC, Motorola, and LG.

The story is similar in the platform space, although slightly reversed: Google is first courtesy of Android, Apple is second with iOS, but the latter is gaining on the former. Again, rounding out the top five are BlackBerry, Microsoft, and Symbian.

The latest data comes from comScore, which as usual surveyed over 30,000 mobile subscribers in the US (although it limited its results to smartphones this time, for some reason). The analytics firm says 125.9 Americans owned smartphones (54 percent mobile market penetration) in December, up 5 percent since September.

Between those two months, here is how the top five smartphones OEMs have fared:

It appears that the iPhone 5 is helping keep Apple ahead, but Samsung isn’t really affected. Meanwhile, we can attribute LG’s gains to Google marketing the Nexus 4, although sales have been limited by supply issues.

Meanwhile, on the software side, Google is dominating and Apple is moving ahead in second place. Everyone else is losing share or has already become irrelevant (take your pick): 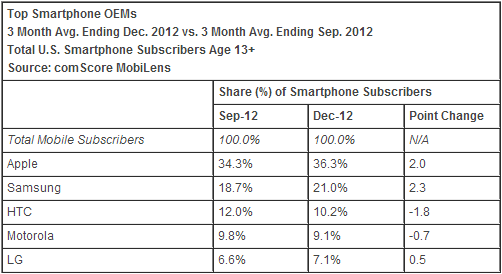 Samsung may be slowly gaining on Apple in the smartphone space, but iOS is growing faster overall when compared to Android, at least in this snapshot. Google gained 0.9 percentage points between September and December (up from 52.5 percent to 53.4 percent) to further pull ahead in first place. Apple increased its share by 2.0 percentage points (moving from 34.3 percent to 36.3 percent).

Meanwhile, BlackBerry is down 2.0 percentage points (from 8.4 percent to 6.4 percent), Microsoft lost 0.7 percentage points (from 3.6 percent to 2.9 percent), and Symbian seems to have stagnated at 0.6 percent. Naturally, we’ll be looking closely to see if BlackBerry can recover in the coming months with its BlackBerry 10 launch, though it will be very difficult as the company continues to be the biggest loser in these studies, month after month.

Again looking at the winners and losers, Google and Apple gained a combined 2.9 percentage points, while the other three lost 2.7 percent. The duopoly is even stealing from other smartphone OS makers as Americans seem to be perfectly happy to choose between the two camps.

Actually song pricing is in no way related to anything sexual. iTunes regularly sells 69 cent songs, and that pricing decision is between Apple and record companies. This is just that regular list with some thematic art and a wink, wink, wink. It’s just funny to see a company that is so typically prudish make a seventh grade sex joke. Whatever, we chuckled. [iTunes Store h/t @MiaLardiere]

A new privacy flaw discovered in Path means it will geotag your posts on the social network even when you’ve explicitly disabled Location Services for the app. It does this by pulling the embedded EXIF tag location information from photos, which contain GPS coordinates, from any images you’ve attached in the iOS Camera Roll. After we notified Path of the discovery, the company says it has patched its app and a new version should be available as soon as Apple approves it in the App Store.

We were first alerted of this issue via a blog post by security researcher and hacker Jeffrey Paul late on Thursday night, and immediately contacted Path. A spokesperson responded this morning that the company was looking into the issue, and then this afternoon Dylan Casey, Path’s Product Manager, posted a comment on Paul’s blog.

The comment was also emailed to us. After thanking Jeffery, Casey stated the following:

We take user privacy very seriously here at Path. Here is what we have discovered and how we are responding:

1. We were unaware of this issue and have implemented a code change to ignore the EXIF tag location.
2. We have submitted a new version with this fix to the App Store for approval.
3. We have alerted Apple about the concerns you’ve outlined here and will be following up with them.

One note to clarify: If a Path user had location turned off and an image was taken with the Path camera, Path does not have the location data. This only affected photos taken with the Apple Camera and imported into Path.

The third point is worth noting, as Jeffrey asked readers of his blog: “Should Apple’s iOS allow applications for which Location Services are explicitly disabled to access location information embedded (by the iOS Camera app) in photos stored in the Camera Roll (when access to photos is granted)? I think the answer here is very clearly no.”

Last year, Path admitted to collecting and storing personal information from the iOS address book even if the user didn’t give it permission to, and quickly released an update the next day, but not before being hit with a massive backlash. After all that, Apple changed its policies so that apps require explicit user permission to access Address Book data.

Jeffrey is calling for the same thing when it comes to EXIF location tags in photos:

If you disable location services for an app, for example, a photo-sharing app or social network, yet take a photo every day (using the Camera app) and then later use that same application (which you have not granted access to your position) to upload that photo, the OS should prohibit the application from detecting your location via the EXIF information in that photo. Otherwise, the app will still have your location on a regular basis, despite the clear opposite intent being expressed by the user (through the disabling of location services for that particular app). This seems pretty clear to me.

Jeffrey has alerted Apple, and now it seems Path has done the same thing. That’s quite a way to show it cares; after all, the company today settled with the FTC for $800,000 and likely wants to avoid anything similar from happening again.