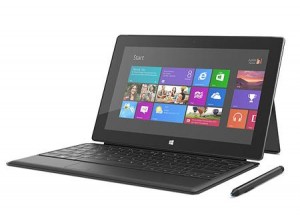 The highly anticipated launch of the Microsoft Surface Pro tablet went over well. How well? So well that inventory levels appear to be minimal just two days later. Shoppers flocked to Microsoft’s website at the stroke of midnight, February 9 to place orders but encountered frustration. 128GB units ($999) ended up selling out, leaving 64GB units at $899 as the available option. Other shoppers chose to visit Staples or Best Buy, only to find only a couple units on hand – which, of course, went quickly. Speculation is that total inventory levels were lower than anticipated. Could it be an effort to portray it as more popular? Was there supply chain issues? Or was that Microsoft’s intention? Who knows.

As we discussed in January, the Surface Pro is a Microsoft PC in a tablet’s body. Windows 8, Intel chip mean it performs like a computer. A touch screen mean it functions like a tablet. We will soon see what the market has to say about the latest Microsoft product and whether the PC performance in a tablet product will succeed. Keep in mind that Microsoft has had their share of successful product launches which are followed by less than average sales. But with the popularity of tablets perhaps long-term Surface Pro demand will live up to that experienced on launch day .

Most every part of our world has been touched by technology. It keeps us entertained, enbles communication and socializing, it keeps us safe and informed. The toilet will even feel the impact of tech. Yes, I’m writing about a toilet. But trust me, it is cool.

The plumbing hardware masters at Kohler want your toilet experience to become the next technology-impacted part of your life. The Kohler Numi toilet brings stylish design and state of the art engineering together into a unique package. Numi includes features like hands free (motion activated) opening and closing plus articulated cover movement so you never see the bottom of the lid. The heated seat means you avoid the cold shock we have all encountered. A warm air vent on the bottom also keeps your foot space heated. Control the temperature and pressure of the self-cleaning bidet as you need to. The most impressive part about Numi is the touch screen remote which controls all of these functions mentioned and more. Choose your flush ( or full), set up different user preferences and even plug into the auxiliary jack on the remote’s wall mount which then plays through the speakers on the back of the unit. Yes, tunes on the toilet. And of course included lighting will guide you to your seat in the dark. Numi performs too – being Kohler’s lowest flow and quietest commode – and is EPA WaterSense certified. Obviously the design of the Numi matches the technology within. So much so that it actually fits in the lifestyle pictures with fashionable models in a sleek L.A. home. Brace yourself for the price tag: $6,390. Yes, a six thousand dollar toilet. But for the person who has everything they can add some tech to their toilet time.
[ A High Tech Toilet copyright by Coolest Gadgets ]

Now you don’t have to fret on Sunday, when the Super Bowl and the newest episode of “Girls” were set to collide: A clever stunt from HBO will let you watch Dunham’s sitcom in advance, starting today.

HBO is letting subscribers watch the next episode of “Girls” right now, via its on-demand cable service and its HBO Go online service. And if negotiating either of those options is too much for you, the pay network will air the new episode Saturday night, a day before the show would normally run. The same goes for “Enlightened,” the Laura Dern sort-of-sitcom.

That’s a smart promotional move, which primarily highlights the benefits of HBO’s watch-when-you-like features. And it gives people like me a chance to write about “Girls,” which is a win-win-win.

But what about the plight of “Downton Abbey” fans, who face the same scheduling dilemma? Slightly less good news for them: They’ll also be able to watch Sunday’s show in advance, if they’ve paid up for an iTunes season pass.

*And yes, we’re assuming there’s someone who falls into that Venn diagram.

Expanding use of cloud computing to deliver software as a service can make it easier for global software companies to earn and keep its profits abroad, outside the reach of U.S. taxes.

VMware has cut its federal tax bill in the past three years because the company conducts the majority of its international business through Ireland. In the three-year period ending in 2011, the company’s tax bill fell despite its revenue rising 86 percent and its pretax profit more than tripling. In fiscal 2011, its U.S. tax rate was 4 percent.

Read the rest of this post on the original site

If you have an iPad and one of Apple’s laptops (a not too uncommon pairing), then be aware that, depending on how you arrange them, your iPad may put your Mac to sleep. Apple has made some creative use of magnets in its systems over the years, with lid latches, MagSafe power connections, and other accessory attachments for its systems. One notable area where Apple has made use of this technology is in its MacBook laptops, where magnets and magnetic sensors in the chassis and lid bezel activate when in close contact, so the system will automatically go to sleep when the display is in a closed position. This feature is a convenient option to have; however, unlike mechanical latches, magnetic fields are not specific to the desired device and will attract or repel items whether you want them to or not, so they may trigger or be triggered unintentionally.

While Kim Dotcom continues to fight his Megaupload copyright case in New Zealand and the United States, a new academic study concludes that “the closing of a major online piracy site can increase digital media sales, and by extension we provide evidence that Internet movie piracy displaces digital film sales.” On Wednesday, Brett Danaher and Michael D. Smith, professors at Wellesley College and Carnegie Mellon University respectively, published a paper on the well-known Social Science Research Network. The pair write: “Controlling for country-specific trends and the Christmas holiday, we find no statistical relationship between Megaupload penetration and changes in digital sales prior to the shutdown. However, we find a statistically significant positive relationship between a country’s Megaupload penetration and its sales change after the shutdown.”

There are many ways to encounter the success of mobile platform, but if you are intending to measure the success by numbers of app downloads metric, than do not worry, ABI Research has already did it for you. According to ABI, the Android will win the race in 2013 with 58% of smartphone app downloads. Apple will be lagging behind with just 33% of downloads. By the inclusion of tablet app downloads, the figures will drastically change.ABI predicted that in 2013, almost 56 billion times app will download and majority of these apps will be of iOS and Android, it is showing that in smartphone market these two are enjoying duopoly. It is said earlier this year by ABI that Android will be having 57% share and iOS will be enjoying 21% share in the global smartphone market. Jointly, these two players were enjoying 92% of the chunk in the market in 2012 Q4 and this is now down to 72% and indicating that some second player is having chance to show its performance.

However, it is clear that Android is having bigger piece of share this year and it is expected to grow further. It will be too early to predict the figures knowing that China is urging in adoption of smartphones. For instance this February, China has passed US in order to become the world’s largest iOS and Android smartphone and tablet users. Apple is certainly not ignoring China and Tim Cook has already announced that China is an important market for Apple. There are many options for Chinese customers to buy, and Apple has also offered them option to buy Apple devices on credit terms.

No doubt, ABI prediction about Android app download is correct, because Android is having low cost smartphone market and having more numbers of customers. But, Apple in terms of making revenue formation from the app is still the leader, as their developers know exactly how to monetise their paid apps, in app purchases, virtual goods and upgrades.

ABI also declared that in terms of tablet app downloads, iOS is leading and this is another reason for shakiness of Android. This year it is predicated that almost 14 billion tablet apps will be downloaded and 75% of them will be accounted for iPad and 17% will be accounted for Android (excluding Kindle Fire). Amazon will be having 4% and Windows Tablets will be having 2% share, as claimed by the firm.